skip to main | skip to sidebar

I should know better that to try to adjust my set height while clipped in. 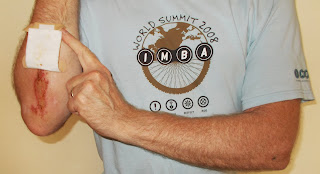 Now I know why bicyclists shave. I was not really hurt at the time. Fell over while attempting to track stand and adjust my seat for the asphalt ride back to the cars after a great mountain bike ride with friends old and new.

Pride comes before the...fall. And it sure did this time. Hurt the most this morning pulling off the first bandage to put this one on. I'll be smarter and shave. Changing the bandage pulls the hair, it gets stuck in the wound and hurts way more then the fall in the first place. As I pulled up the bandage I grabbed some scissors and cut the hair. I never really noticed how long my arm hare is. After a close trim with the scissors I got a new disposable double blade razor and went after the rest.

The photo above does not show how close a shave there is around AND THROUGH the wound. Yes, I ran the new razor over the wound and finished off any remaining long hairs with the scissors or pulled them out with tweezers. Ouch.

This event should not prevent me from attempting to ride may age. The half way to eternity ride September 15, 2013 if I can get a friend to partner for it. Two weeks to train.

(I plan on doing the shorter ride from Adrian, Idaho. The round trip from there to the end of the road is about 55 miles.)

SUNDAY, September 15 9:30 am is the- Jason Werst Memorial "Century" Ride.
This is an informal century ride that has no entry fee. Actually in a typical Jasonesque manner the full "century" is 112 miles. Turning around at the base of the Owyhee dam makes it a regular century. The full course goes to the end of the road.  If you want to get the best 50 miles of the ride you could meet the front of the group n Adrian, Oregon between about 11;10 and 11:20 at the Adrian Market.
The ride group meets at the lower dam of Lake Lowell and will roll out at 9:30 am. The ride is quite beautiful, very rural and provides views of the Snake river, Owyhee river and the canyon that it dug.
No Entry fee, No Registration, No insurance, No organized support. No Numbers, No T-Shirts. Just a group ride in great terrain with fellow cyclists in memory of a fine fellow.
You can learn more about Jason and the impact he had on people at this Facebook page https://www.facebook.com/groups/239774832745484/
The Out & Back route was first ridden by Jason and a group of friends on September 19, 2010 in celebration of 2nd anniversary of Jason's stem cell transplant as he wrestled with his Acute Myeloid Leukemia.
The next edition was being planned when Jason's Leukemia re-emerged in September 2011. This world lost Jason last October.
This should show the route http://www.mapmyride.com/routes/fullscreen/56394906/
We have scheduled the ride for the 3rd Sunday every September as an informal fund raiser for the for the Leukemia and Lymphoma Society Boise chapter in Jason's honor.
The ride is informal and though there will be some limited support this year from G Corsa thanks to the generosity of Mike Cooley. Volunteers to drive sag/water  on course are welcome.
Stores for fuel and natural breaks are available in
Homedale (Miles 13
Adrian Mile 29 (Adrian Market you can do a 45 or 55 mile beaut of a ride from here)
Adrian Mile 83 (or 72 if you turn at the dam)
Homedale Mile 98 (0r 87 if you turn at the dam)
So carry a little cash and support the local merchants.
If you would like we encourage you to make a donation in Jason's Honor online at
http://www.lls.org/#/waystohelp/donate/donateonline/
Whether you can make a donation or not, and whether you had the pleasure of knowing Jason or not, we welcome and encourage you to join us.
If you would like a shorter ride with the group then drive to Adrian and the round trip from there to the end of the road is about 55 miles.
St. Luke's Sports Medicine/ Lost River Cycling
Posted by Harley at 11:42 AM

Harley
Meridian, Idaho, United States
As a life time learner, I re-educate myself on the ever evolving technology landscape. For about half my working life I sold and supported recreational sporting goods for alpine skiing, camping and bicycles. Merging the Bicycle and Ski rental shops at Sun Valley Resort in Idaho was a special time during the 50th anniversary of the resort. Much of my volunteer work has been spent as an advocate for access to public land for bicycling. I currently volunteer at the Boise Bicycle Project. I helped apply for the grant and managed the development of a Bicycle School for children. This school is now part of the Boise Parks and Recreation ongoing summer program.